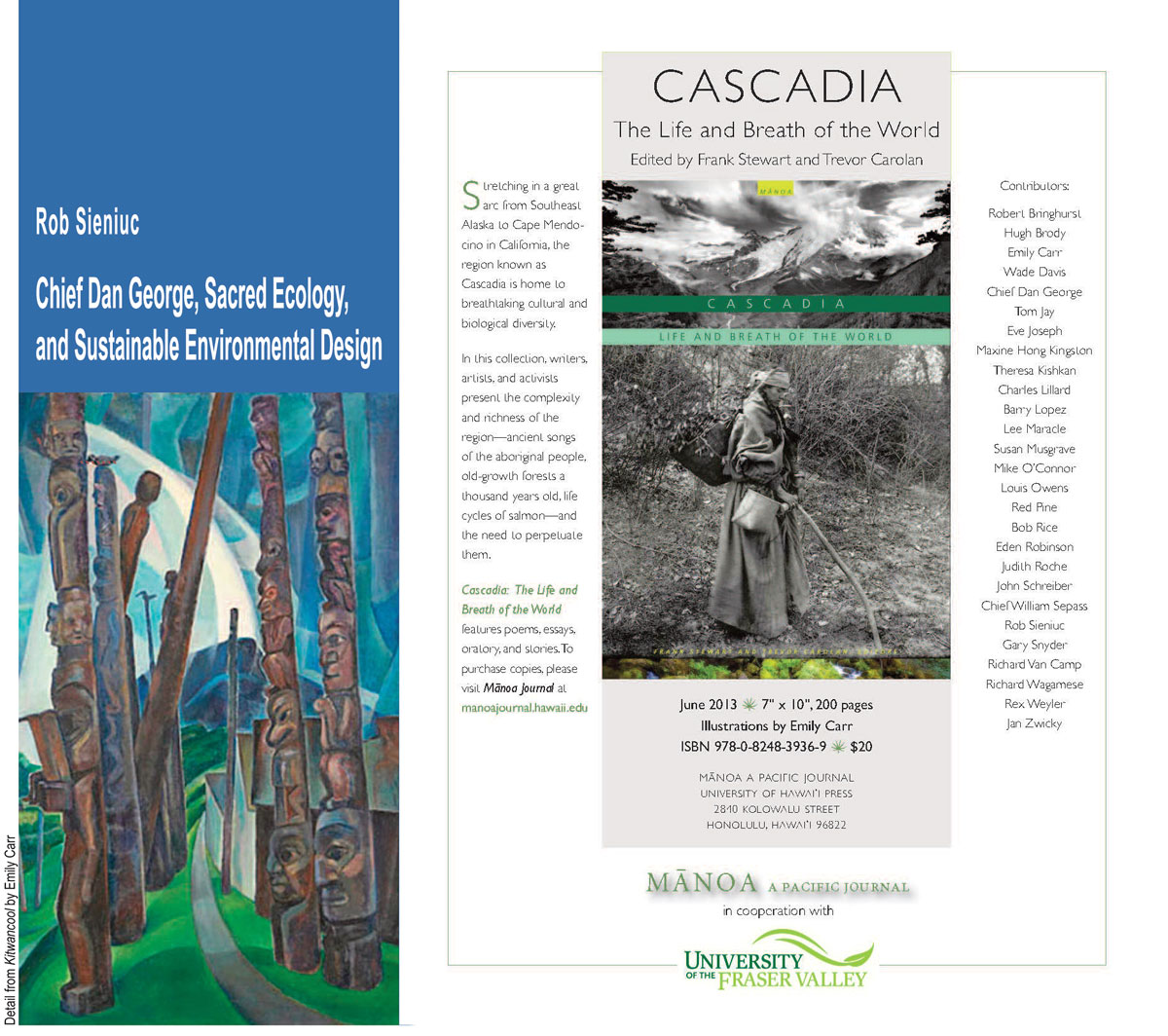 "I was born a thousand years ago, born in the culture of bows and arrows . . .
born in an age when people loved the things of nature and spoke to it as though it has a soul."     ~ Chief Dan George

In 1971, when I was a twenty-one-year-old undergraduate student in philosophy, I heard Chief Dan George speak on Native spirituality in Edmonton, Alberta. He was already a respected actor in the U.S. Having played a significant role the previous year in the hit movie Little Big Man—based on the novel by Thomas Berger and directed by Arthur Penn—he was nominated for Golden Globe and Academy Awards, and won New York Film Critics’ Circle and National Society of Film Critics’ Awards. Dan George had had no training as an actor, but he was a true Chief: from 1951 to 1963, he was the elected leader of the Tsleil-Waututh Nation, a Coast Salish band in North Vancouver. He was a man of great dignity and wisdom. The authenticity of his spirit and his character is what moved people who saw him in film, on TV, or on the stage.

Before he was famous in Hollywood, Canadians already knew Chief Dan George well. Almost by chance, he was cast by the CBC in a 1960s television series called Caribou Country, and he stunned audiences with his portrayal of David Joe in George Ryga’s play The Ecstasy of Rita Joe. In 1967 he became a national figure when he delivered “Lament for Confederation”— accompanied by the drumming and chanting of his family—to a crowd of over thirty thousand at the Empire Stadium during Vancouver’s celebration of Canada’s Centennial. In this famous speech he said, “Today, when you celebrate your hundred years, oh Canada, I am sad for all the Indian people throughout the land.” He asked, “Shall I thank you for the reserves that are left to me of my beautiful forests? For the canned fish of my rivers? For the loss of my pride and authority, even among my own people?”

Chief Dan George later gained more success as an actor, but he was cherished foremost as a spokesman for First Nations people, speaking out against injustices done to them and against the environmental degradation of their land.

When I heard him speak in 1971, I had been studying Asian wisdom traditions in the writings of Alan Watts and Krishnamurti. His talk addressed the large questions of humanity’s relationship to nature and reminded me of what I was studying. Krishnamurti, for example, taught that nature was a vital part of our being: if we hurt nature, we hurt ourselves.  Chief Dan George spoke of our being part of Mother Earth, of the interdependence of everything, and of the need to be caring and respectful always. This was before the Norwegian philosopher Arne Næss coined the term “deep ecology” and before Greenpeace brought environmental activism to the high seas of Alaska’s Aleutian Islands and then to the rest of the world.

Chief Dan George was the first Native person I had ever met. He wore a tweed jacket, blue jeans, and pointy black shoes. His long silver hair framed a weathered face. He was then in his seventies, and had been a longshoreman and laborer into his forties. His appearance was at once fragile and powerful. A passionate storyteller, he described where he had grown up in North Vancouver: on land surrounded by mountains and the misty rain forests near the water’s edge. The Chief joked about being an “old Indian,” explained how living in that environment defined who he was—a member of the Tsleil-Waututh, or People of the Inlet—and described intimate relationships with the land, sea, and animals. He said that human beings did not own nature and that we should take from Mother Earth only what we need, sharing it; that we should connect to the land where we live, instead of trying to escape to a remote, pristine wilderness; and that we need to return to the land with a spiritual perspective, one that recognizes the soul of a place. Listening to him speak, it was clear to me that he was someone who lived by the stories he told.

Later, as a graduate student in environmental design, I was influenced by the new interdisciplinary strategies pioneered at the University of California–Berkeley in the late sixties and introduced to us at the University of Calgary. They emphasized a holistic view of planning that integrated environmental studies and architectural design. To those of us in Western Canada who’d been inspired by Chief Dan George, these unconventional approaches to architecture complemented his wisdom, and we found a mantra in the title of E. F. Schumacher’s book Small Is Beautiful. After receiving my graduate degree, I interned with Jack Long, Canada’s earliest environmental architect. The creator of the country’s first commercial building “green roof”—at Rogers Pass in the Rockies in 1977—Long headed the Solar Research Shelter. At this working studio, I and others experimented under his direction with renewable energy from the sun, the wind, and other sources. Not surprisingly, when I began my own architectural and planning practice in British Columbia, I founded it on ecologically sound, community-based ideals. Since then, I’ve seen the approach that Chief Dan George advocated continue to influence communities and leaders, despite resistance from corporate interests, government agencies, and regulators.

Many of us non-Natives have had homesteading grandparents who had direct connections to the land and relied on it for sustenance. However, today, we live mostly indoors, in climate-controlled buildings that keep us isolated from nature but have an enormous impact on the environment. These structures are situated across vast tracts of land, without regard for how they alter the flow of rain to the water table, disturb wildlife habitat, and consume materials and fuel in their construction and maintenance. According to the Rocky Mountain Institute, “America’s 120 million buildings consume a prodigious amount of energy: 42 percent of the nation’s primary energy, 72 percent of its electricity, and 34 percent of its directly used natural gas.” The design, construction, and maintenance of residential housing and office buildings consume the majority of the world’s natural resources and contribute most of the waste in our landfills. Almost 50 percent of all greenhouse gas emissions are traceable to these humanmade environments.

What mainstream media analysis consistently overlooks is that of all the world’s building stock, single and multi-family residential housing contributes most to the global ecological crisis. What are our options? Successful, sustainable design compels us to rediscover the ecological interconnectedness First Nations people have with their environments. This means we need building projects, particularly housing, that benefit directly from the sun’s and earth’s passive energy. Examples include low technology applications, such as passive-solar and earth-tubes for heating, the incorporation of natural ventilation—in plain English, more windows that open—and more effective use of natural daylight, rather than energy intensive mechanical systems.

In Canada, we’ve seen First Nations communities take the lead with such demonstration projects as the ground-breaking Seabird Island First Nations Sustainable Community. Located in rural Agassiz, British Columbia, this was the first on-reserve housing project regarded as environmentally sensitive. From the beginning, in 2002, my company was involved in the design and planning, and we tried to take into account traditional First Nations social values and architecture, including such features as tribal pit-housing. We chose to use renewable energy sources—including wind, sun, and geothermal—and only local, non-polluting materials appropriate for the climate and place. The project was built by local crews of First Nations people, and community members were trained in new skills, which in turn contributed to the economy of the Seabird Island First Nations. A “healing garden” provided a place for self-reflection, outdoor activity, and growing food.

At Mayo, in the Yukon Territory, we’ve worked with the First Nation of Na-Cho Nyäk Dun to develop housing and community facilities as part of plans to both expand and relocate to safer, higher ground. Many of the existing structures are deteriorating or are structurally unsafe due to the continual movement and shifting caused by the permafrost’s degradation. Here, too, innovations in community planning are being combined with alternative energy sources and materials.

At Carmacks, in the Yukon Territory, a major diesel spill caused the displacement of the daycare, community healthcare, and social services offices of the Little Salmon Carmacks First Nation. The replacement buildings have been designed as super-green, energy-efficient facilities with double walls, triple-and quadruple-glazed windows, arctic roofs, and heavy timber for framing. Wood—the only major renewable, carbon-neutral building material—was used extensively in constructing the facilities. These choices will result in substantial reductions in greenhouse gas emissions and energy costs.

More and more, designs like those implemented at Mayo and Carmacks are needed to address the kinds of ecological distress that are appearing in the Far North and elsewhere as a consequence of global climate change.

Chief Dan George asked us to walk softly on the earth. Under the leadership of his son, Leonard George, the Tsleil-Waututh have been nationally recognized for their economic development initiatives. These include lower-cost housing options on leased Aboriginal land that benefit the younger Vancouver urban dwellers nearby. Chief Justin George—Dan George’s grandson—and the Tsleil-Waututh people are also active in the cleanup and rehabilitation of Burrard Inlet and Vancouver’s working inner harbour. Continuing their tradition as stewards of the inlet, they advocate limiting tanker traffic that would cause irreparable damage to their ancestral home. These quietly activist First Nations people are leaders in the renewable energy sector as well, reinvesting funds—raised from their own residential housing projects—in wind-turbine power development in the U.S. This is the Tsleil-Waututh First Nations’ updated version of walking softly on the land.

According to the United Nations Population Fund, “it now takes the Earth 18 months to regenerate the natural resources that we use in a year.” The commonly promoted United Nations definition of sustainability as a tripartite, equal relationship among the environmental, social, and economic realms is therefore problematic. The adverse effects of greenhouse gases, the destruction of micro-ecosystems, and the rapid depletion of non-renewable energy sources are at critical levels. Compounding this is the potential for further environmental catastrophe through the employment of techniques like fracking in oil and gas exploration, particularly in sensitive regions like the Alaskan and  Canadian Arctic. It is ironic that Chief George’s final resting place on the shores of Burrard Inlet overlooks the proposed expansion route terminus for the controversial Kinder Morgan Trans-Mountain Pipeline, which will transport bitumen from the Alberta tar sands and threaten Pacific Northwest coastal waters.

Eco-citizenship in the twenty-first century obliges us to create a way of living that is based on less economic growth, personal consumption, and waste. This is the practical dimension of what spiritual and scientific leaders term “interconnectedness.” Traditional First Nation teachings call for thinking seven generations ahead about the environmental consequences of our personal actions. They tell us we are entitled to only one handful of earth and have a responsibility to our children to return it the way we found it. In my work as an architect and planner, I have tried to practice the wisdom Chief Dan George shared with us young students more than forty years ago. Such wisdom is the foundation of what he called "Keeping the Earth Alive". 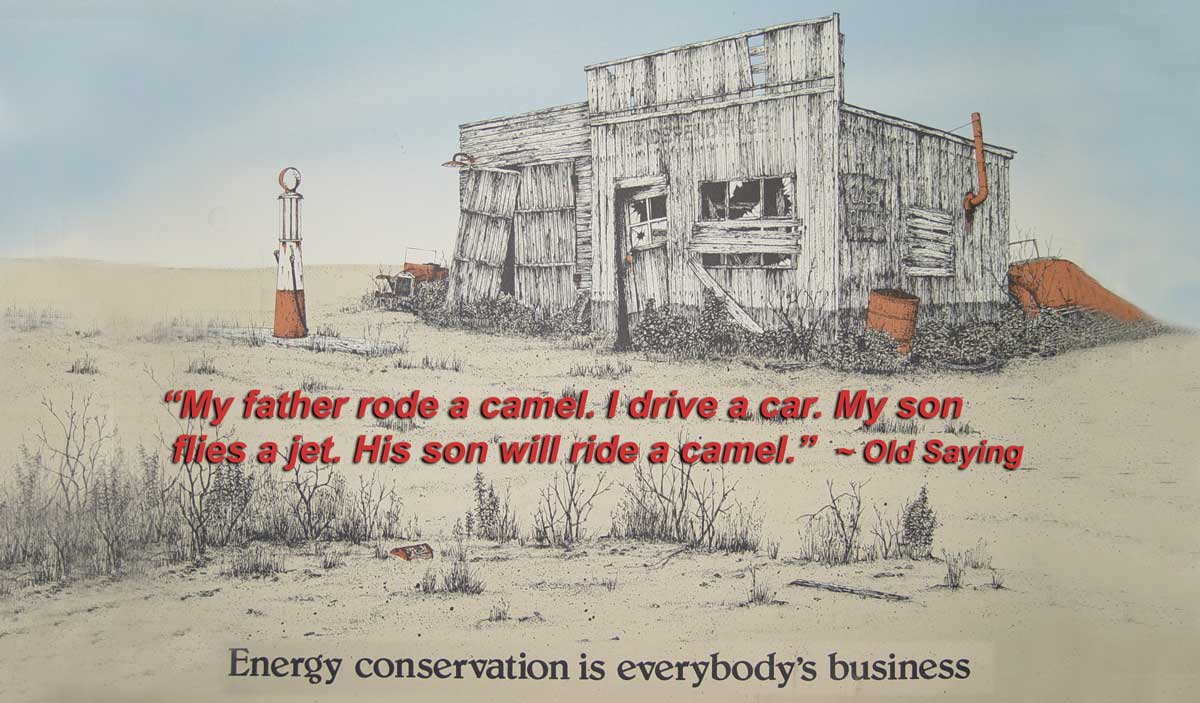 Lost in the Ozone Again.. Drunk on the Riches of Oil